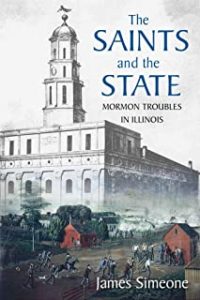 Reviewed by Conor Hilton for the Association of Mormon Letters

The Saints and the State: The Mormon Troubles in Illinois by James Simeone is an excellent work of political science. The book is a part of the New Approaches to Midwestern Studies series from the Ohio University Press and has a different approach and feel to the story of the Saints in Nauvoo than most other Mormon Studies books that I have read.

Simeone is a political scientist by training and that training comes through in the book. The book is a little denser than most other Mormon Studies work I have read, talking through some different theories within political science to explore and interpret the Mormon Troubles, as the book’s subtitle refers to the events surrounding the early Saints in Illinois. This may be somewhat off-putting for some readers, but Simeone does fairly good work explaining the concepts and ideas in a more or less straightforward manner. Though the book’s prose is fairly dry for the most part.

The perspective that Simeone brings to this chapter in history is fairly unique. The book is deeply interested in what we can learn about democracy and politics from the ways that the Mormons, anti-Mormons, and others in 1840s Illinois worked to resolve the tensions that they all experienced. Simeone’s concern here bears some resemblance to Ben Park’s religious and political history interests that animate Kingdom of Nauvoo. If you found yourself wanting more political theory and insight into the specific political dynamics that were present among the other settlers in Illinois and Governor Thomas Ford, then The Saints and the State is for you. Simeone’s place largely outside the bounds of Mormon Studies also causes him to bring a different insight to the various dynamics in Illinois that he’s studying. The way that Simeone weighs the evidence and discusses the various actions of the different factions and individuals involved is unlike other accounts I’ve read (in both illuminating and obscuring ways).

The Saints and the State has seven chapters, each of which explores either a facet of the early Saints or the other settlers in Illinois. The later chapters explore some of the main tensions that cropped up between these two communities, ending with a close look at Thomas Ford and his own political ideology and background and how that influenced the choices that he made in relation to both the Mormons and the anti-Mormons.

The Saints and the State turns more broadly in the conclusion, thinking about what the limitations are on democracy and liberalism when confronted with religious (and other) diversity. Simeone argues that the Mormon story in Illinois demonstrates that “A fair democratic society requires republican sacrifice from both majorities and minorities”, suggesting that for harmony and order to be found, all groups need to sacrifice something.

In The Saints and the State Simeone has crafted a fascinating read that is well worth the time of folks interested in the more politically oriented questions raised by the Mormon troubles in Illinois. I’ll be thinking about the questions raised here for some time, as they feel uncomfortably resonant for our present moment of heightened democratic tensions and majority-minority contests.