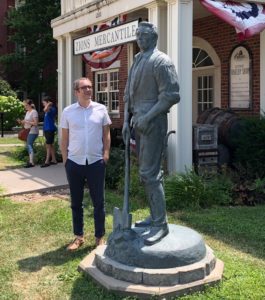 Mike Lemon interviews Noah Van Sciver, the winner of the 2018 AML Comics Award.
Noah Van Sciver is a talented cartoonist who has garnered many awards in his career. He was nominated in two categories for this year’s Eisner Awards: Best Humor Publication (A Perfect Failure: Fante Bukowski Three, Fantagraphics) and Best Reality-Based Publication (One Dirty Tree, Uncivilized Books). He was awarded the AML’s Comics Award for One Dirty Tree. He is currently working on a graphic novel about Joseph Smith.

The following interview was conducted over several emails with Mike Lemon. Mr. Van Sciver’s comics and drawings can be found on his blog and Instagram account.

You have a unique artistic style. What can you tell us about your artistic process?

Thank you very much. I don’t know what to attribute my style to, though. I have to guess that it comes from a lot of different historic cartooning that inspire me and that I’ve internalized over the years. My artistic process is immediate. I have to get my drawings out in a burst of energy. I don’t like to work on the same drawing for a week.

I also draw small enough that I can carry my pages in my backpack and draw outside of the house. I can draw anywhere. 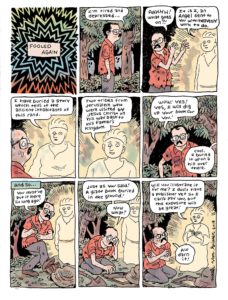 For being immediate, the images do not come across as frenetic or hurried. I suppose with this response, I am becoming interested in what you use to draw anywhere. For your drawings and lettering, what materials (pens, pencils, paper) do you use? And for colors, what do you use?

Well, that’s nice to hear! There is a controlled looseness that I chase in my cartoon style. I haven’t quite got it correct yet though. I will someday… I made some folders out of cardboard that I can hold pages in progress in, and I draw with either Rapidograph pens or Microns.

You also have developed a strong writing tone that mixes humor and tragedy. What authors/cartoonists have influenced your writing style?

This is a tough one. I’m not sure about my conscious influences when it comes to comics writers. I have to say off the top of my head, Seth (Gregory Gallant), Daniel Clowes, Julie Doucet, Rutu Modan and Joe Matt. Many of the 90s alternative cartoonists inspire me to tell stories today. 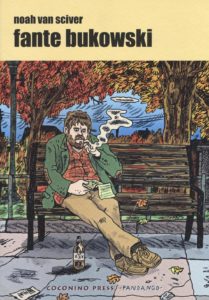 Many of your books are set in recognizable American cities (Denver, Columbus, Merchantville, Write River Junction). Why have you chosen to locate your comics in real cities?

There’s different purposes for each one. Sometimes if the story is autobiographical, the town or city it took place in is featured (as with Merchantville and White River Junction) and other times its just an inside joke to set a fictional story in a place I spent a lot of time living in (with Columbus and Denver).

Thank you for this response. I enjoy seeing the skylines and landscapes from these cities. The locations ground the narrative in reality; however, you also play with city (such as putting Kilgore Books in Columbus). Of course, I’m taking your word for this, as I have spent little time in Columbus and Denver).

That’s true, I do take artistic liberties. Kilgore is in Denver not in Columbus, and there isn’t a Nazi bar in Columbus as I portrayed in the second volume of Fante Bukowski.

But I do what needs to be done in the name of storytelling.

You have built a career in telling human stories. What about the comics medium (comic strips, single issues, graphic novels, etc.) allows you to explore humanity?

Because comics are a person-to-person art form that you have to read and connect with alone, and that are often times created alone- I think comics can explore depths that many other art forms cannot. The storytelling tools available to a cartoonist are well-suited for naturally portraying many different layers of a character. A caption can be useful for giving the reader a third person observation, and a thought bubble can reveal a character’s inner dialogue and a speech balloon will tell you how they communicate with those around them. And as the reader we’re interacting with comics we read by adding the movement, the voices and even filling in the background details in our minds. This creates a personal experience that is special to the comics medium.

This is an incredible answer! Can I use this when I teach graphic novels to college students? So many people assume comics equal fantasies (superhero, horror, mythic, Western, etc.). But you and other cartoonists have demonstrated time and again that this medium can present human narratives in ways that text-only narratives cannot. With the visual language of comics, you encourage different levels of interaction.

Ha ha, thank you. Yes of course.  Thank you. 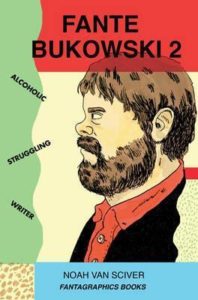 You have written three books on Fante Bukowski and have said in other interviews that you are done with his story. Why did you decide to end Fante’s story with him returning to Columbus? And what are the possibilities that you could return to this character and his world?

Never say never! But I will admit that it was easier to write the character when I was a struggling artist than it is now. The last volume I could tell didn’t have the sharp edge that the first 2 had. Though it’s my favorite of the 3. I feel like I had to bow out before I began repeating myself or Fante became a caricature of himself.

Why is the third volume your favorite? You want to avoid Fante becoming a caricature of himself, although some may read him as a caricature of the “tortured artist.” How have you balanced your approach to Fante as a character, so he does not become a caricature?

(Incidentally, I really enjoy how volume three opens with Fante dressed as David Foster Wallace. He comes across as a character stuck in the past, from zine culture to emo music.)

The third volume is my favorite because the art is slightly better and I’m happier with the story personally. He’s definitely a caricature of a tortured artist, no doubt about it. I’m not sure if I have balanced it, but I have thrown in enough quirks that he doesn’t feel one note. Things like the emo childhood hopefully define him as more than just the cliche struggling poet character under scrutiny that he was in the first book. 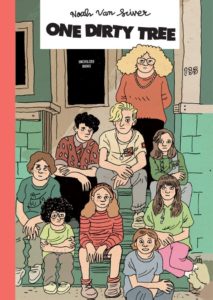 One Dirty Tree is a viscerally real introspection at your childhood and young adulthood, and in at least one interview, you discussed feeling uncomfortable with publishing this book. What were your personal and professional motivations for writing this memoir? And how has your relationship to the text changed (if at all) since its publication?

Beginning a new decade of my life, looking back and reflecting on the events of my life and what made up my story felt like something I needed to tackle.

One Dirty Tree is only part one of the story, but I don’t know if I’ll get to the second part. I was uncomfortable with the book because of the embarrassment of that era. I laid a lot of things bare.

It wasn’t meant for print. It was only something I was writing for folks who were backing my Patreon. Telling loose stories about my childhood. Then I allowed it to be published as a book in Italy (under the title 133) where it was well received and about a year later I gave in to an American publisher…

I think it was helpful creating that book. It was therapeutic putting things on paper and externalizing those feelings in that way. So I do not regret that book. 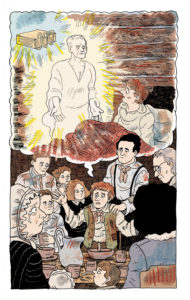 You are currently editing your graphic novel on Joseph Smith. What interests you about Smith the man?

The story is fascinating. I was raised in the LDS church. I knew the basics of the church’s history but I hadn’t delved too deeply into the prophet.

I have always wanted to write this graphic novel. I never could figure out how I would tackle it until the last couple of years.

What has changed in the last few years that have allowed you to tackle Smith’s life? I am impressed with the pages that I have seen on your blog. You are not preparing a hagiography that venerates Smith as a prophet. It also seems that you are not creating a “Mormon bashing” text. Instead, you are focusing on Joseph Smith’s life as a man and situating him within his community. What have you learned about him from this project? 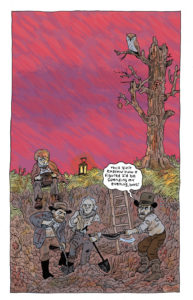 That’s true, I have no interest in creating an anti-LDS book, nor the kind of biography that the church could easily publish on their own. What’s changed is that I feel like I have the artistic chops to tackle the story now and I know I can take on a bigger story. I can handle it with maturity. So far I’ve mostly been impressed with the drive he had to accomplish things despite the fact that he really came from nothing with no real education and a bad leg. To establish entire cities and to raise himself up is pretty inspiring stuff. The not-so-charming things I discovered about him you can read about later in the book…

You have also written or drawn other novels interested in Americana (Johnny Appleseed and Abraham Lincoln). How does your latest book on Smith fit into your interests in American history and culture? 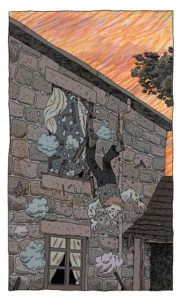 It doesn’t fit in with those books. This is a personal exploration. I needed to know this man and the times he came from because he played a part in my early life and upbringing.

This is important to me and I believe in this and am putting my heart into the entire process.

Yeah, I’m sorry about that question. I was trying to situate these three men into their historical contexts (all three were alive during the Second Great Awakening). So I was thinking from a historical perspective. Thank you for your clarifying answer.

It was all practice for the Joseph Smith book. I was meant to draw those to get to where I am now I’m sure.

What are other projects that you are currently working on? 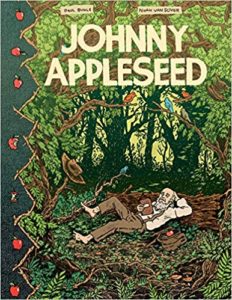 There’s always a rotation of things I have to take on in order to support myself. At this moment I’m drawing a biography of the Grateful Dead and compiling the Fante Bukowski stories for a complete Fante Bukowski edition coming in the spring.

The Grateful Dead biography sounds amazing! When will that be published? When can readers expect the complete Fante Bukowski edition?

I believe it’s scheduled for this Spring, and so is the complete Fante Bukowski collection as well!

Mike Lemon received his doctorate in English from Texas Tech University, where he teaches composition and literature courses. He has published and presented research on American comic books and fandom, nineteenth-century American literature, and ecocriticism. He has been an invited lecturer on gender and comics for college classes and community round tables. His latest research explores gender and sexuality in the works of Kelly Sue DeConnick.

This site uses Akismet to reduce spam. Learn how your comment data is processed.